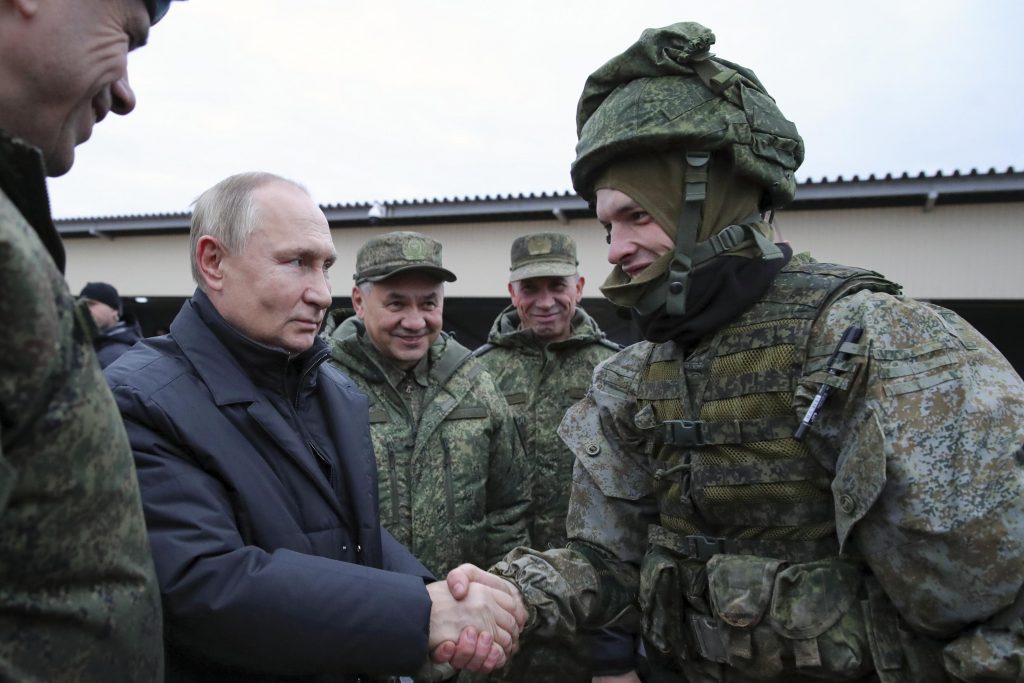 The mobilized reservists visited last week by Russian President Vladimir Putin at a firing range southeast of Moscow looked perfect in the picture.

The Kremlin video of young people preparing for war in Ukraine showed them in pristine uniforms and equipped with everything necessary for combat: helmets, bulletproof vests and sleeping bags. When Putin asked them if they had had any problems, they shook their heads.

The scene is a stark contrast to the many complaints circulating in Russian and social media about lack of equipment, poor accommodation conditions and poor training for new recruits.

Since Putin announced the 9/21 mobilization, independent media, human rights activists and conscripts have painted a bleak picture of a dangerous, chaotic and ethnically biased operation to get as many men as possible and quickly drag them to the front lines. no matter your skill, training or equipment.

Videos on Russian social media showed recruited men complaining of overcrowded and dirty barracks, toilets overflowing with waste, and a lack of food and medicine. In some, the men displayed rusty weapons.

In a video, a group of recruits gathered in a field say they were left there without food or shelter. Others showed men forced to sleep on bare benches or squeezed into the ground.

“We did not look for you, you called us. Look, look at this! How long can this last?” asks an exasperated person in one of the recordings.

Putin’s partial mobilization decree did not spell out the recruitment criteria or say how many there would be. Defense Minister Sergei Shoigu has said it will affect only about 300,000 reservists with relevant combat or service experience.

Protests against the levy have been harshly suppressed and tens of thousands of men have fled Russia to neighboring countries to avoid enlisting.

In the week after the decree, a young man opened fire on a recruitment officer in the Siberian city of Ust-Ilimsk, seriously wounding him. On October 15, there was a shooting at a training camp in the southern region of Belgorod with 11 dead and 15 wounded. Recruitment offices and other administrative buildings have also been set on fire.

It has become clear that in a country where almost all men under the age of 65 are registered as reservists, the mobilization process was not done carefully. There are abundant reports of subpoenas being served on people with no military experience. Police stopped men on the streets of Moscow and other cities, or raided hostels to round up guests of fighting age. Mandatory medical check-ups were often skipped by recruiting offices.

The accelerated call-up will hardly do anything other than “slow down the progress” of Ukrainian troops in the war that began eight months ago, military analyst Pavel Luzin said in an interview.

Activists also say that members of ethnic minorities have been disproportionately recruited in some regions. Videos were released of protests in the Muslim-majority region of Dagestan, with families claiming more recruits were gathering there than elsewhere.

In Russia’s remote north and along the border with Mongolia, indigenous citizens were “detained in their villages” as part of the mobilization, Vladimir Budaev of the Free Buryatia Foundation told the HPD.

In remote regions of Sakha and Buryatia, recruiters combed the taiga for potential soldiers and “issued summonses to everyone they saw,” he said.

In the first two weeks of the operation, authorities in some regions said they had sent hundreds of recruited men home despite not meeting the criteria.

“The task of a military enlistment office is to recruit, recruit whoever they can grab,” said Elena Popova, coordinator of the Conscientious Objector Movement.

Putin himself acknowledged “mistakes” in the process and demanded improvements.

But even when the citations went to people who had served in the military, that didn’t necessarily mean they had combat experience. Some ex-servicemen often did not receive adequate training during their service and instead performed service work.

A woman who spoke to The Associated Press on condition of anonymity for fear of retaliation said her 31-year-old husband had completed his mandatory military service six years earlier and had received “neither instruction at a firing range nor any combat exercises on the ground,” but the authorities had tried to enlist him anyway.

In fact, he had only ever held a gun in his hand once, when they were taught how to disassemble and reassemble an automatic rifle, he explained. Mainly “they swept (the complex), they cleared the snow”.

Relatives of the recruits said they had to spend their own money to get supplies and basic supplies. Groups were formed on the internet to raise funds to buy equipment.

One such campaign was led by state TV presenter and Kremlin-backed lawmaker Yevgeny Popov, who said reservists from the Taman artillery division had received shoes and clothes, but had “a serious lack of drones, walkie -talkies, smartphones with maps (for the gunners), binoculars, headlights (and) backup batteries,” he said.

Russian media reported the death of several reservists in Ukraine and their relatives told the press that they had received little instruction.

Asked by a journalist why several reservists had died in Ukraine just three weeks after being enlisted, Putin confirmed that training could last between 10 and 25 days.

Russia does not have the capacity to train thousands of men, said Luzin, the military analyst. “The army was not prepared for mobilization. He never prepared for it,” he said.

Putin has promised to complete the mobilization by November, when the usual fall call-up is scheduled. Military experts and rights groups say enlistment offices and training camps cannot process the two operations at the same time, warning that the call could resume months behind schedule.

By mid-October, 222,000 reservists had been mustered, Putin said. It was unclear whether it would be possible to recruit another 80,000 in the remaining two weeks.

Although there are no longer masses of Russian men fleeing the country and street protests have practically stopped, there are still some who resist.

Independent and opposition media have published instructions to legally prevent the call to arms. Rights groups advise men not to sign citations, a requirement for them to be considered officially surrendered, and not to go near recruiting offices.

Some men apply for alternative civil service, a right lawyers say is guaranteed by the Constitution.

Kirill Berezin, 27, responded to a summons passed under the door of his St. Petersburg apartment by going to an enlistment office to apply for alternative civilian service, but was taken to a military division anyway, his friend Marina said. Tsyganova.

Berezin, who has been in a training center in southern Russia ever since, presented a document to his commanders stating that “he cannot serve with weapons, he cannot kill people and help people who do so” because it is “opposite to my conscience.”

Tsyganova told the HPD that she had represented him in a St. Petersburg court, which rejected the lawsuit last week, saying only regular recruits under the age of 27 were eligible for alternative civilian service. Her defense team plans to appeal, she said, and she at least hoped he would not be sent to Ukraine while the legal battle continued.

This dispatch was compiled by The Associated Press from outside Russia.