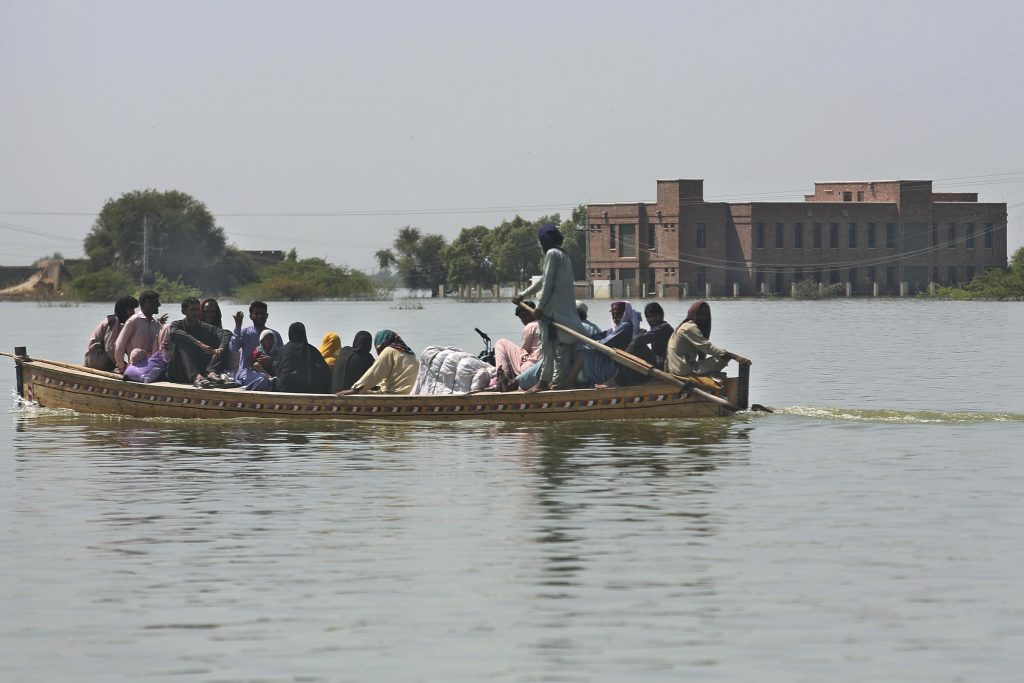 DADU, Pakistan (HPD) — Every aspect of Rajul Noor’s life was blighted by massive flooding during the monsoon season. The house of this 12-year-old girl was destroyed, as was the school that she loved so much. The friends with whom she played and walked to school were scattered as her families sought refuge elsewhere.

“Our world was under water and no one helped us,” the girl said, speaking in a tent where she, her parents and four siblings live in Dadu, in Pakistan’s Sindh province.

Almost all of the cotton and rice crops in the district were ruined. More than half of primary and secondary schools were totally or partially destroyed, according to authorities. There are boats everywhere on the mainland that were dragged by the waters, with the belongings of their owners. Weeks after the rains ended, buildings are still partially submerged.

These scenes are repeated in cities and towns across Pakistan.

The destruction fueled the debate on “climate justice”: should rich countries, which are the main cause of climate change that generates so many natural tragedies, pay compensation for the damage suffered by poor countries like Pakistan?

It’s an idea that developed nations reject, but Pakistan and other developing countries want it to be seriously considered at next month’s COP27 summit on climate change in Egypt.

In many ways, Pakistan symbolizes the current dilemma. Scientists say there is no doubt that climate change contributed to the more intense monsoon rainy season. The rains were three and a half times what normally falls and left a third of the country under water. At least 1,300 people died and 33 million were affected.

Pakistan, which contributes just 0.8% of the world’s emissions, suffered damages worth more than 30,000 million dollars, equivalent to more than 10% of its GDP. It must repair or replace 2 million homes that were damaged or destroyed, almost 24,000 schools, some 1,500 health care centers and 13,000 kilometers (7,800 miles) of highways.

The water also swept away bridges, hotels, dams and other infrastructure works.

“These 33 million people pay with their lives and livelihoods for the industrialization of the largest nations,” Pakistani Foreign Minister Bilwal Bhutto-Sardari recently told the United Nations.

Developed countries refuse to contemplate reparations, fearful that claims will rain down on them from all corners of the world. They have agreed to contribute money to help poor nations reduce their emissions and adapt their infrastructure to cope with climate change, but they take their time making their contributions. At last year’s COP26 conference in Glasgow, the United States and members of the European Union refused to create a fund to compensate poor countries for “damages” already caused by climate change.

“The time is going to come when (the rich countries) will have to do something. This is a claim that is not going to go away,” said Margeretha Wewerinke-Singh, professor of international law at Leiden University in the Netherlands, who is advising Vanuatu on the issue.

Wewerinke-Singh believes that you can go to court. International law stipulates that nations have an obligation not to cause damage to the environment of other states and that any violation entails the obligation of reparations, either by repairing the damage or paying compensation.

The expert indicated that Pakistan has two options: To begin with, it can go to international organizations such as the Criminal Court of Justice. Countries like the United States and China –two of the main emitters of greenhouse gases–, however, do not recognize the jurisdiction of the ICC. The other alternative would be to sue governments and fossil fuel companies in national courts.

That is what was done in relation to tobacco.

“The legal disputes around climate change are just beginning. Tobacco is an example of something that was given very little chance of success, which nevertheless worked,” he stated.

Pakistan has said it does not want reparations. It only asserts that rich countries have a moral obligation to help it combat the impact of climate change.

Observers say that this policy can yield more benefits than the claim for reparations.

Another relevant issue is the responsibility of poor countries in the problems they face due to climate change.

In the case of Pakistan, Ayesha Siddiqi, an expert on the subject, affirms that the country is responsible for many of its vulnerabilities because it did not take preventive measures, a lot is built in areas prone to flooding and mega-projects such as huge dams and drainage systems abound. drainage along the Indus River that make matters worse by preventing floodwaters from having anywhere to go with as little damage as possible.

“Everything revolves around how to control the river,” Siddiqi said.