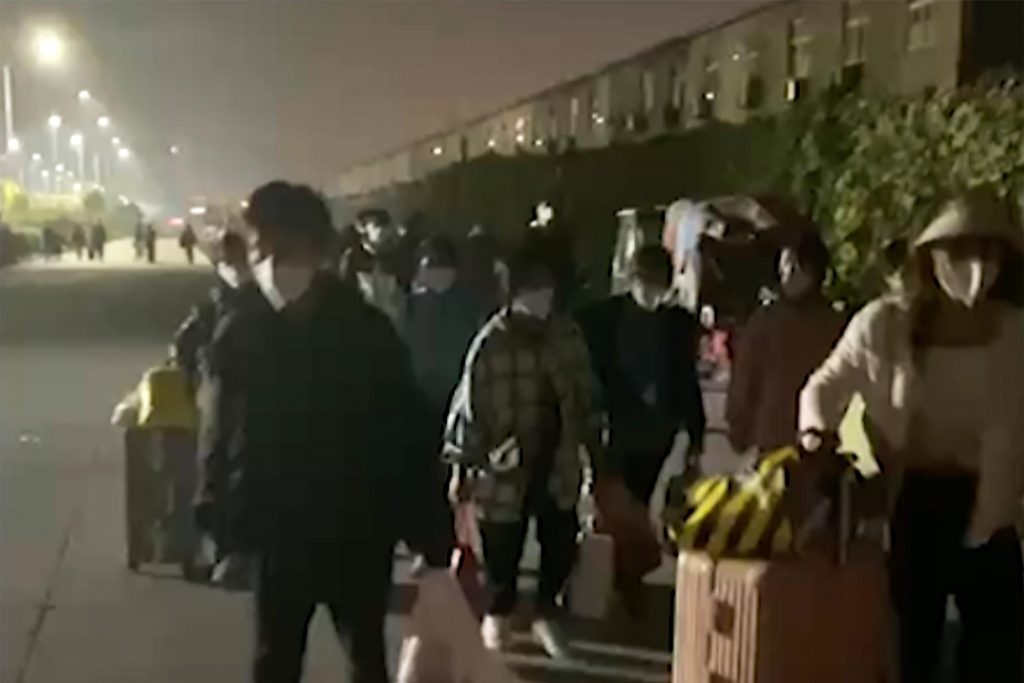 HONG KONG (HPD) — Several workers assembling Apple Inc.’s new iPhone have walked out of its factory in northern China to avoid COVID-19 restrictions after some co-workers were quarantined over a viral outbreak. .

Suspected Foxconn workers appeared in videos circulating on Chinese social media climbing fences and walking down a road with their belongings in tow.

The scenes underscored growing public discontent with China’s “zero COVID” strategy, in which the government attempts to stamp out outbreaks with strict testing, isolation and confinement measures when infections are detected.

The outbreaks have put entire cities under quarantine. In the latest wave of infections, the Shanghai Disney Resort park said on Monday it would close with immediate effect and for an indefinite period “to meet the requirement of pandemic control and prevention.”

In an online notice, the park apologized for the inconvenience and said it would offer exchanges or refunds to those affected by the closure.

Foxconn’s plant in Zhengzhou, Henan province, has room for up to 350,000 workers and is one of the largest factories in China that assembles products for Apple Inc. including the new iPhone 14.

It was not possible to verify all the videos showing workers allegedly leaving the compound. It was unclear whether the leaving workers had escaped or been allowed to leave.

Foxconn did not initially respond to a request for comment.

Volunteers from nearby towns offered food and drink to Foxconn workers. One of those volunteers, who asked to be identified only by his surname Zhang, for privacy reasons, was left in charge of distributing supplies prepared by his town in Xingyang County. He said that the people who appeared in the video that he had uploaded to the Douyin short video platform were Foxconn workers because they had to take that road to leave the factory.

It was unclear how many people were currently working at the Zhengzhou plant, how many had left, or how many had been affected by COVID-19 restrictions at the site.

Media reports this week indicated that the factory had introduced a “closed-loop” system that largely restricted workers’ movements between their residence and the plant.

Foxconn employees had complained about the quality of the food and the lack of medical care for those who tested positive, amid concerns about a rise in infections, according to local media. The company denied rumors that there were 20,000 people at the plant infected with COVID-19.

Cities near Zhengzhou urged Foxconn workers to inform local authorities if they planned to return to their hometowns, so that adequate isolation measures could be prepared.

The company promised factory workers on Sunday to ensure the safety, legitimate rights and income of those who remain, the Zhengzhou government said on the WeChat platform.

The day after videos of workers leaving on foot circulated, Foxconn and several local governments organized shuttles for employees who had chosen to return home. It was unclear to what extent they had had a say in the matter.

Video producer Liu Zheng in Beijing contributed to this report.