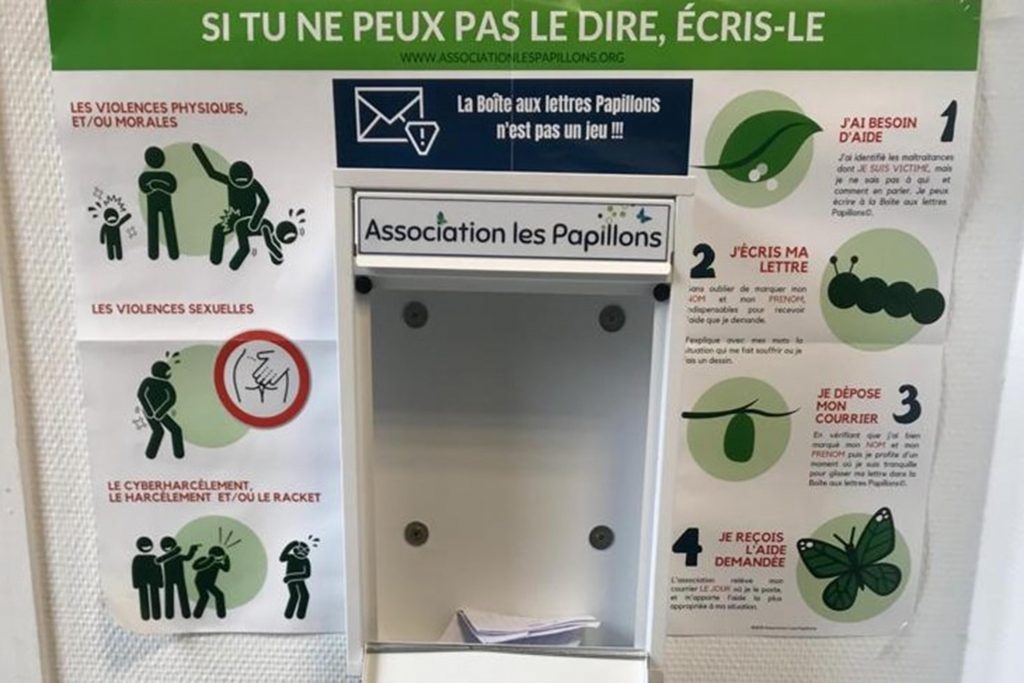 PARIS (HPD) — A new campaign in France allows children to report abuse simply by placing letters in easily accessible mailboxes for expert evaluation. The initiative has led to several police investigations, while at the same time revealing the staggering magnitude of the problem in the country.

The initiative, called Les Papillons (“The Butterflies”), was created two years ago by a police officer who was abused as a child. The motto is: “If you can’t say it, write it”.

Some 200 mailboxes have been placed in schools, sports clubs and other places accessible to approximately 61,000 children.

Most of the complaints are about insults, teasing and psychological aggression. But 13% are about aggressive children, 21% about physical abuse and 7% about sexual abuse. Within this last category, 30% occurred within the family circle and 70% were against girls.

“It’s particularly helpful for children who can’t express painful facts out loud, or who don’t know who to talk to,” said Florence, the headmistress of a school in rural eastern France.

“It is very difficult to talk about sexual abuse, especially if it is someone within or close to the family, while a mailbox is neutral,” added Florence, who asked not to use her last name to protect the privacy of the children involved.

Most mailboxes are in primary schools and most children that age do not have access to cell phones with which they can call 119, the official number for reporting child abuse.

Police officer Laurent Boyet, director of Les Papillons, said the initiative helps tackle an issue that is difficult to detect in official statistics.

In projections based on responses received last year, the group estimates that of the 12 million children in preschool through high school, there are some 840,000 victims of sexual abuse, including 240,000 victims of incest.

“The great advantage of this process is that it is based on the words of the children themselves, there is no interference from adults,” emphasized Boyet.

Boyet wrote a book in 2017 recounting his own experience. He said that he was raped by his brother, who was 10 years older, when he was between 6 and 9 years old.

“I know this from my own experience: the assailant forbids (children) to speak … But nobody tells a child that he cannot write,” Boyet said.