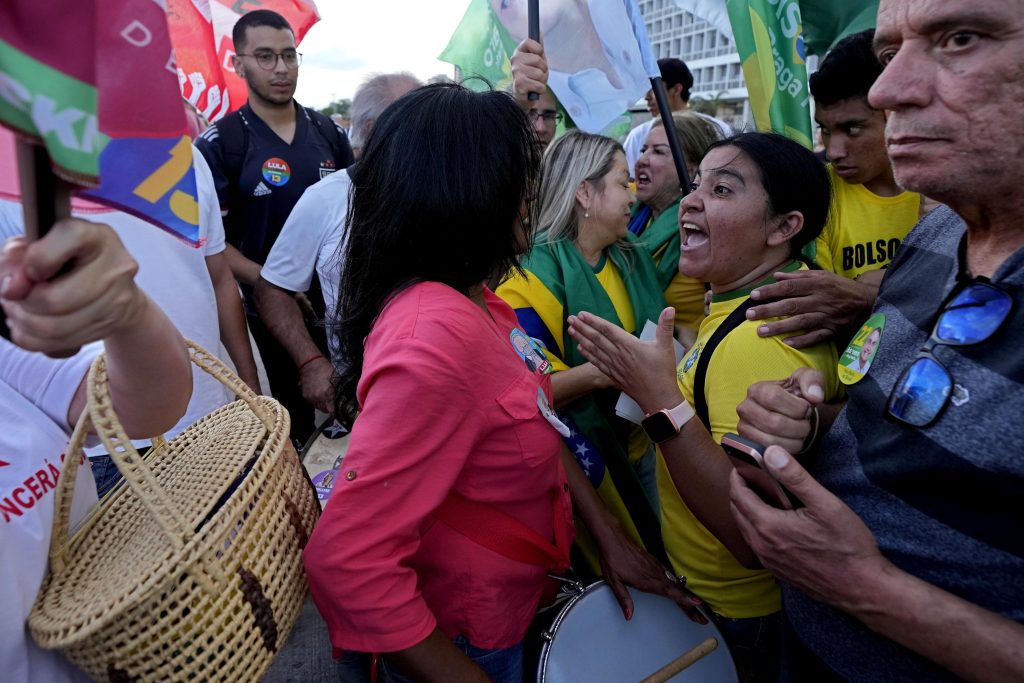 RIO DE JANEIRO (HPD) — Brazilians will choose Sunday between a future of conservative values ​​under far-right President Jair Bolsonaro or the hope of returning to a prosperous past under leftist Luiz Inácio Lula da Silva. In the intensely polarized country, many voters will simply vote against the candidate they despise.

On the one hand, Lula claims to have improved the livelihoods of Brazilians when he was president from 2003 to 2010, and has promised to serve them again. His opponent Bolsonaro, who has won over religious conservatives, assures that Lula’s return to power would open the door to communism, the decriminalization of drugs and abortion.

For months it seemed that Lula was headed for an easy victory. Opinion polls can be very unreliable in predicting election results, particularly in a huge nation like Brazil. But analysts and politicians agree that the contest has become close.

Bolsonaro has attacked the ministers of the Federal Supreme Court and insisted on questioning the reliability of the country’s electronic voting system, which according to analysts is a clear indication that he may not recognize the electoral results, like former US president Donald Trump, of whom he is an admirer.

The Brazilian leader, who says he hates socialism, has relentlessly spent huge sums on the poor ahead of the October 30 runoff election.

Bolsonaro expanded Brazil’s largest social assistance program, granting cooking gas vouchers to low-income people, granting 2.7 billion reais ($500 million) to taxi and truck drivers, and announcing a program to write off up to 90% of the debts of some 4 million people with state banks, among other measures.

Since July, some three million additional families have been included in the main social assistance program, whose expenses have been increased. The program has cost 67.4 billion reais ($12.7 billion) in the first 10 months of the year, according to statistics from the Ministry of Citizenship.

“Never has this amount of money been channeled to the people at the same time, nor has the machinery been used in such a bold way as Bolsonaro is doing,” said independent political analyst Thomas Traumann.

Lula’s Workers’ Party, which routinely draws support from the poor, underestimated how Bolsonaro would use the levers of power, he added.

Analysts say that at times Lula has conducted himself as if victory were assured, a matter of just letting the clock tick. The second round of October 2 was a wake-up call, because Bolsonaro significantly exceeded the numbers given by the polls at the polls, which he and his allies had discredited by saying they underestimated his popularity. Some had given Lula a double-digit lead, but Bolsonaro finished some five percentage points behind.

Still, the former president has focused on stoking nostalgia for his presidency, in which Brazil became B of the BRICS group of emerging nations and tens of millions rose to the middle class, eating well and traveling. Lula has promised a return to those glory days, without detailing how she will do it.

“Lula’s campaign is about the past; that’s her biggest strength and that’s her biggest weakness,” said Brian Winter, vice president for policy at the Americas Society/Council of the Americas. “It’s about the memory of the boom years of the 2000s that makes people want to vote for him. But his unwillingness or inability to articulate new ideas and present new faces have left him somewhat unprotected while Bolsonaro narrows the gap.”

Now most polls show Lula leading by a narrow margin. On October 22, the president of his party released a video in which he assures that Lula will only win if everyone turns out to vote. Traumann stressed that the tone marked a departure from the overconfidence the party had previously exhibited.

Years after massive corruption in the Workers’ Party was revealed, some voters remain disgusted by it and support Bolsonaro, even those who disagree with his crusade as a cultural warrior, or hold him responsible for many of his actions. the almost 700,000 deaths from COVID-19 in Brazil and the worst deforestation in the Amazon rainforest in 15 years. Similarly, others who had resigned from the Workers’ Party have stated that they will vote for Lula.

“This is an election of rejection, not of choosing the one who represents one’s best ideals,” said Thiago de Aragão, director of strategy at political analysis group Arko Advice. “Most of Bolsonaro’s supporters do not necessarily love Bolsonaro, nor do they support him, but they hate Lula more. And vice versa. They are two of the most rejected politicians in the history of Brazil”.

In April, Lula chose Geraldo Alckmin, a former center-right opponent, as his running mate, part of an effort to create a broad democratic front to counter Bolsonaro.

In recent months Lula has lost support among evangelical voters, who now make up about a third of Brazil’s population, and his campaign team has been slow to adopt a strategy to stem the drop in support. Evangelicals were key to Bolsonaro’s 2018 electoral triumph, but the president has lost some support among them this year.

An intense propaganda campaign on social networks with the support of Bolsonaro to bring them back into the fold has produced results. Some of it has been unscrupulous, as with the allegation that Lula communicates with the devil, for example, which is part of the torrent of disinformation related to the elections.

Bolsonaro’s campaign outmaneuvered Lula by forcing him to debate an agenda of values, according to Creomar de Souza, a political analyst and CEO of consultancy Dharma Politics.

Both campaigns have not presented many plans, and have been more focused on stigmatization and slander both on a personal level and on social networks. Bolsonaro’s side has generated more content. When they have submitted proposals, both sides have focused on who will provide ongoing social assistance, even though fiscal room for maneuver is very narrow.

In their first and only debate between the two on Oct. 16, the two candidates exchanged insults and called each other liars more than a dozen times.

Lula scored points in his favor when he confronted Bolsonaro with criticism of his handling of the COVID-19 pandemic, to which the president hesitated several times to respond. Then Bolsonaro hit back at Lula with the Workers’ Party’s recent history of corruption. Lula was imprisoned for 580 days, although the Federal Supreme Court later annulled the former president’s sentence on the grounds that the judge did not act impartially and had colluded with prosecutors.

De Aragão said that each candidate “visibly loses his advantage” when confronted with his big mistakes, which constitute “dark points in the history of Brazil.”

Bolsonaro’s upward momentum appears to have stalled down the stretch, according to Dharma’s de Souza. De Souza attributed it to an article in the local newspaper Folha de S.Paulo, according to which Bolsonaro’s economic team is evaluating modifying the way the increase in the minimum wage is calculated, and to an allied politician who injured two policemen in a gunfight.

The candidates will meet again in their last debate on Friday, less than 36 hours before the polls open. It will be broadcast by the television giant Globo and will reach millions of Brazilians.

“It’s a race that anyone can win, Lula is still the favourite, but by a small margin,” Winter said. “On Sunday people are going to be very nervous seeing these results arrive.”