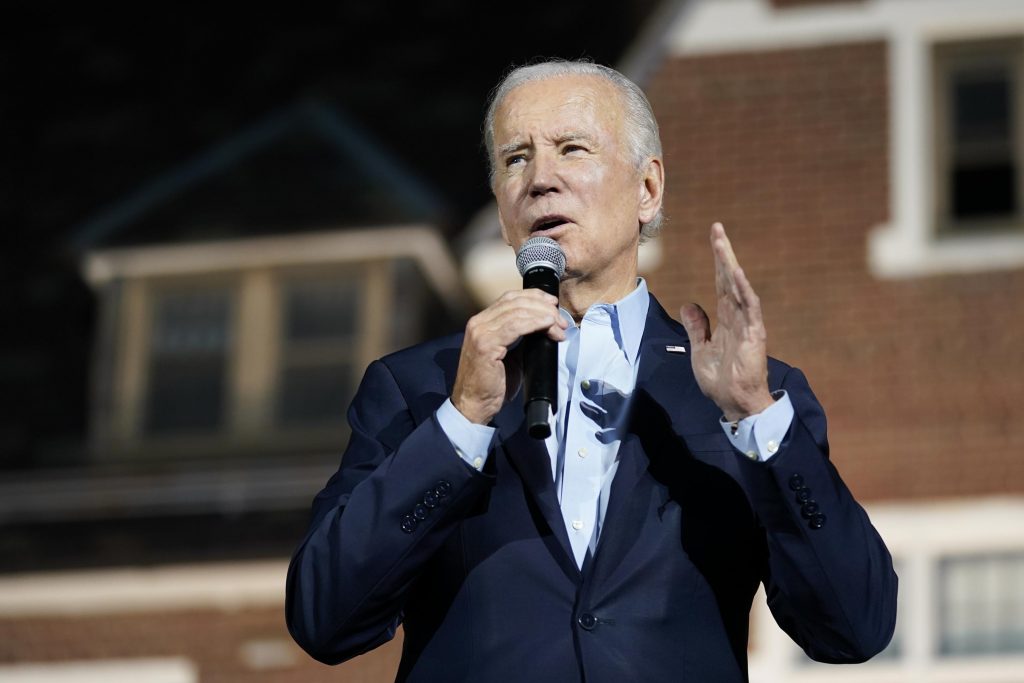 YONKERS, N.Y. (HPD) — President Joe Biden has called Republicans running for office across the country election deniers who reveled in political violence, while his predecessor, Donald Trump, He urged voters to oppose the “growing tyranny of the left” on the last Sunday before midterm elections that could change the balance of power in Washington.

On the final day of a four-day, five-state campaign tour, Biden participated in a rally at Sarah Lawrence University in Yonkers, New York, where he endorsed Democratic Gov. Kathy Hochul.

Hochul is locked in a tight race with Lee Zeldin, who is seeking to become the state’s first Republican governor since George Pataki left office in 2006.

The president said hundreds of Republican candidates for state, local and federal office are “election deniers who claim I did not win the election, even though hundreds of attempts to challenge the results have failed, even in Republican courts.”

Biden said that for all deniers “there are only two outcomes in an election: either win or steal.”

Biden said that Republicans were willing to condone last year’s insurrection at the U.S. Capitol and that after the recent attack on Paul Pelosi, the husband of House Speaker Nancy Pelosi, some members of that party “did it.” they took lightly” or were “making excuses.”

“There has never been a time in my career when we have glorified violence based on political preference,” the president said.

More than 41 million people have already voted in elections that will decide control of Congress and several governorships, and which are the first national elections since a mob stormed the Capitol. Earlier on Sunday, as Trump addressed his supporters in Miami, a reference to Pelosi prompted chants of “Lock her up!” — a stark example of how distant the two sides are.

Trump hopes strong Republican results on Election Day will build momentum for his 2024 bid, which he plans to launch this month.

“I’ll probably have to do it again, but stay tuned,” Trump said, promoting an event he has scheduled for Monday with Ohio senator candidate JD Vance. “We have a great, great rally. So stay tuned tomorrow night.”

Trump also told the crowd that “all free and caring Americans must understand that the time to defend against this growing leftist tyranny is now,” and called on his supporters to push back against “radical leftist maniacs.” . He stated that Hispanics will provide strong support for Republican candidates.

Senator Marco Rubio, who is seeking re-election, accompanied Trump at his event. Who was not invited was the Republican Governor of Florida Ron DeSantis, who is playing for his re-election against Democrat Charlie Crist and is considered Trump’s main rival if he decides to run for the White House.

DeSantis staged his own events Sunday in another part of the state where he stuck to the core of his re-election campaign, including haranguing against COVID-19 vaccination requirements and “wokeism” in schools and other parts of the state. society. The governor avoided antagonizing Trump at his events, meaning there was no duel heading into 2024 like the ones that could be in their near future.

Trump said on Sunday that Florida would “re-elect Ron DeSantis as its governor.” But he was much more belligerent during an event in Pennsylvania on Saturday night, where he referred to the Florida governor as “Ron DeSanctimonious.”

It’s a rivalry that has been simmering for more than a year, as DeSantis has taken increasingly bold steps to make a name for himself nationally and to build a fundraising network.

Trump remains easily the most popular figure in the Republican Party. But many Trump supporters are eager for DeSantis to run, seeing him as a natural successor to Trump, without Trump’s considerable negative political streak.

For Democrats nationally, the focus is on the fate of their tight control of the House and Senate, which could evaporate after Tuesday.

Representative Sean Patrick Maloney, director of Democratic campaigns in the House of Representatives, is in a tight race for his seat. But he insisted Sunday that Democrats “will do better on Tuesday than people think.” He added that his party “is not perfect” but “we are responsible adults, who believe in democracy.”

“I think this race is going to be extremely close, and I think everyone who is concerned about the extremism of this MAGA movement — the racism, the anti-Semitism, the violence — needs to get out the vote, and I don’t just mean Democrats, but so are independents and reasonable Republicans,” Maloney said on NBC’s “Meet the Press,” referring to former President Donald Trump’s “Make America Great Again” slogan.

Voters could punish the party that controls the White House and Congress amid rising inflation, concerns about crime and pessimism about the country’s direction. History indicates that the party in power suffers major setbacks in the midterm elections.

On a weekend where former Democratic presidents Barack Obama and Bill Clinton were also on the campaign trail, First Lady Jill Biden attended Mass Sunday while campaigning for Democrats in Houston. Like her husband and her Democratic predecessors in the White House, she argued that the future of democracy could be decided on Tuesday.

“There is a lot at stake in this election,” he declared. “We must raise our voice on issues of justice and democracy.”

At a rally in Chicago, Vice President Kamala Harris made a similar speech, assuring that “these attacks on our democracy will not only have a direct impact on people across the country, but possibly around the world.”

Trump has long falsely claimed that he lost the 2020 election because Democrats cheated, and has even started raising the possibility of voter fraud this year. Federal intelligence agencies have warned of the possibility of political violence by right-wing extremists.

“If we take back the House and the Senate, it’s the American people saying to Joe Biden, ‘We want you to work on our behalf and we want you to work with the other party to solve the problems we’re facing,'” McDaniel said at the CNN’s “State of the Union” program on Sunday.

Lee Saunders, president of the American Federation of State, Municipal and County Employees, the largest union of public employees in the United States with 1.4 million members, has traveled the country to support the Democrats. “It’s going to be tough, it’s going to be tough, but we’re not giving up hope,” he said.

Weissert reported from Washington and Gómez Licón from Miami. Associated Press writers Jill Colvin and Hope Yen contributed to this report from Washington.