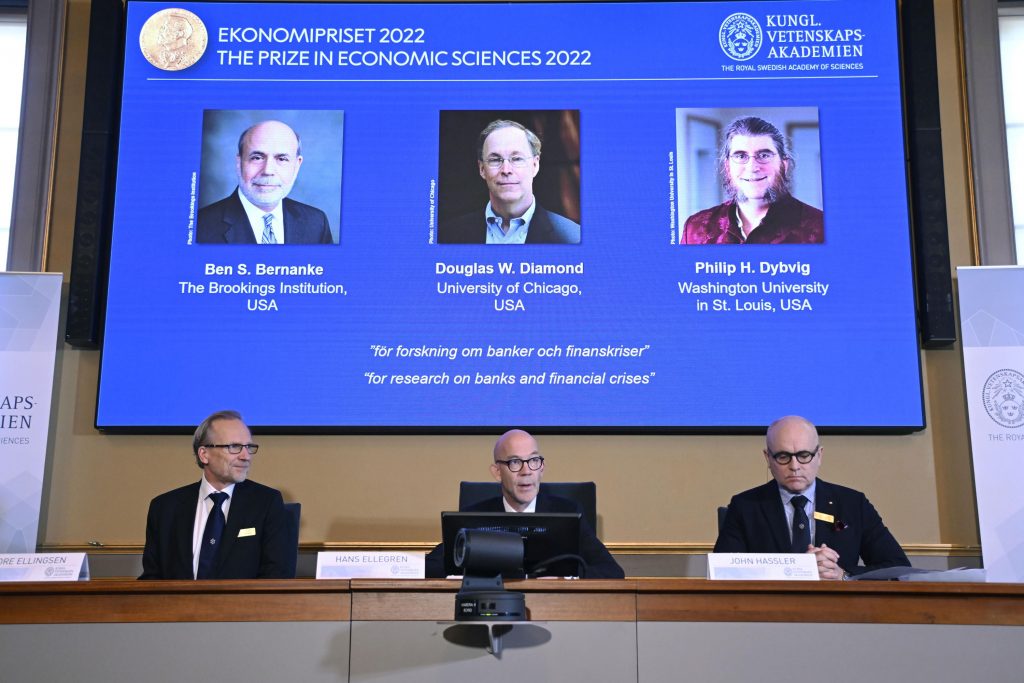 The Nobel panel at the Royal Swedish Academy of Sciences recognized Bernanke, Douglas W. Diamond and Philip H. Dybvig for their research showing “why preventing bank collapses is vital.”

His findings from the early 1980s laid the groundwork for the regulation of financial markets, the committee noted.

“Financial crises and depressions are the worst thing that can happen to the economy,” said John Hassler of the Committee for the Prize in Economic Sciences. “We need to have an understanding of the mechanism behind them and what to do to correct them. And this year’s laureates provide that.”

Bernanke, 68, examined the Great Depression of the 1930s when he was a professor at Stanford University, showing the danger of bank runs – in which frightened people flock to withdraw their savings – and how crashes bank failures led to widespread economic devastation. Bernanke was Fed chairman from 2006 to 2014 and now works at the Brookings Institution in Washington.

Before Bernanke, economists viewed bank collapses as a consequence, not a cause, of economic slumps.

Diamond, 68, who works at the University of Chicago, and Dybvig, 67, from Washington University, St. Louis campus, showed how governments guaranteeing savers’ deposits can prevent a spiral of financial crises.

“Probably the most gratifying thing for us is that the authorities really seem to get it, and the ideas that we had, which are quite simple, could be used in the current financial crisis,” Diamond told The Associated Press in Chicago.

When it comes to the global economic turmoil created by the COVID-19 pandemic and the war in Ukraine, the financial system is “much, much less vulnerable” to crises due to memories of the 2000s crash already. better regulation, Diamond said in a call with the Nobel panel.

The research by the three turned out to be useful in real life when investors panicked the financial system in the fall of 2008, unleashing the longest and most painful recession since the 1930s.

Bernanke, then central bank chairman, worked with the Treasury Department to prop up the biggest banks and ease a shortage of credit, a lifeblood of the economy.

He cut short-term interest rates to zero, mandated the Fed’s purchase of mortgage investments and Treasury bonds, and established unprecedented lending programs. Collectively, these measures reassured investors and strengthened the big banks, and they were credited with not triggering another depression.

The Fed also pushed long-term interest rates to record lows, earning Bernanke sharp criticism, especially from some Republican presidential candidates in 2012, who said the central bank was hurting the value of the dollar and risking to unleash inflation later.

And Bernanke’s unprecedented activism at the Federal Reserve set a precedent for the central bank to respond quickly and forcefully to economic shocks.

When COVID-19 hit the US economy in the early months of 2020, the Fed, under Chairman Jerome Powell, quickly cut short-term interest rates back to zero and pumped money into the financial system. That forceful intervention—along with a massive increase in government spending—quickly ended the decline and unleashed a powerful economic recovery.

But the quick recovery came at a cost: Inflation started rising rapidly last year and is now near its highest level in 40 years, forcing the Fed and other central banks to back down and raise rates. to cool down the economy.