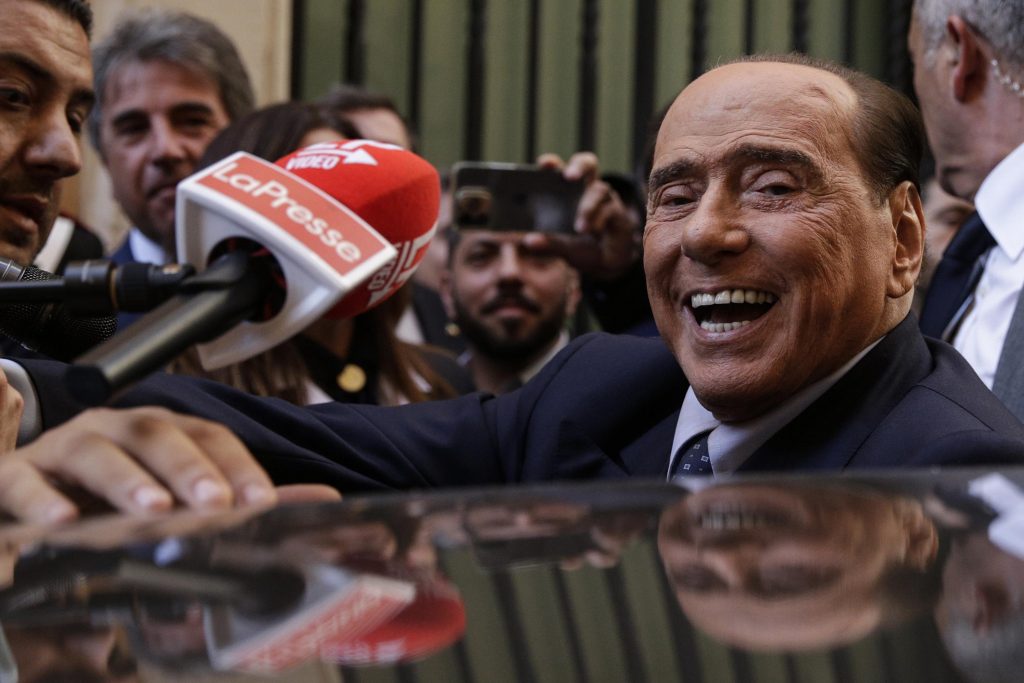 ROME (HPD) — Former Italian Prime Minister Silvio Berlusconi, who has a longstanding friendship with Vladimir Putin, was recorded boasting that he had recently rekindled his relationship with the Russian president, with whom he exchanged gifts of vodka and wine and letters. pretty”.

Italy’s LaPresse news agency published what it said was audio of Berlusconi, 86, addressing lawmakers from his center-right Forza Italia party during a meeting this week in the Chamber of Deputies.

“I have reconnected with President Putin … a little bit a lot,” Berlusconi was heard on the recording. “He sent me 20 bottles of vodka and a really nice letter. I responded with 20 bottles of Lambrusco (a sparkling rosé wine) and an equally beautiful menu.” The occasion was Berlusconi’s 86th birthday on September 29, LaPresse said, four days after the right wing won the majority of votes in the Italian general election.

The statements made headlines as Italy’s conservative coalition, led by Giorgia Meloni, who has clearly backed Ukraine in the Russian war, is divvying up ministries ahead of formal consultations to be held this week to finalize a new government. Forza Italia, which is the minority partner, aspires to the Ministry of Foreign Affairs, among others.

Brothers of Italy, Meloni’s party, which has its roots in a neo-fascist movement, did not respond publicly. But the opposition Enrico Letta, of the Democratic Party and who has warned that the coalition represents a threat to democracy, did. In a tweet, he recalled that the other member of the alliance, the right-wing League, has questioned the European Union’s sanctions on Russia for their impact on the Italian economy.

“Who is hurting Italy abroad? The opposition that makes opposition? The speaker of the (lower) House who delegitimizes the EU sanctions against Russia? Berlusconi reconnecting with the invader of Ukraine?” Letta wrote.

Renew Europe, which brings together centrist and liberal MPs and is the third largest group in the European Parliament, urged the European People’s Party, to which Forza Italia belongs, to condemn the statements.

“The EPP says that Putin is a threat to the West and must be defeated. Time for your friends in the EU to stop campaigning,” the group tweeted.

In the audio, Berlusconi also appeared to defend Moscow’s position on the war, conveying to his parliamentarians that Russian officials have repeatedly said the West is at war with Russia “because we are giving Ukraine weapons and funding.”

This is not the first time Berlusconi has seemed to come to Putin’s defense. At the end of the election campaign, he appeared to justify invading the Kremlin by pointing out that Putin was forced into it by pro-Russian separatists in the Donbas region of eastern Ukraine.

“The troops were supposed to come in, get to kyiv in a week, replace the Zelenskyy government with decent people and leave,” Berlusconi told the host of his favorite late-night talk show on September 22. He later retracted it, noting that his words had been “oversimplified.”

Berlusconi’s office similarly tried to deny his statements on his birthday vodka tape. In a statement Tuesday, his team insisted that he had not resumed his relationship with Putin and that he “told lawmakers an old story about an episode that happened years ago.”

Hours later, after the release of the tape, Forza Italia tried to distance itself from the comments.

“The position of Forza Italia and President Silvio Berlusconi with respect to the Ukrainian conflict and Russian responsibilities is known to all and is in line with the position of Europe and the United States, reaffirmed on several occasions in public,” the formation said in a statement. “There is no room for ambiguity, nor has there been.”

Berlusconi has a long history of friendship with Putin, hosting the Russian leader at his villa in Sardinia and even traveling to Crimea with him in 2014 after the Kremlin annexed the Ukrainian peninsula.

Berlusconi’s latest remarks are likely to complicate his relationship with Meloni, who is expected to become the next prime minister. Meloni’s far-right credentials and former Eurosceptic views have drawn attention in some European capitals, but she has staunchly backed NATO and Ukraine in the conflict.

Relations between the two politicians have already been strained by Berlusconi’s insistence on placing one of his loyalists in the Meloni government and by Forza Italia’s refusal to vote for his candidate for Senate president.