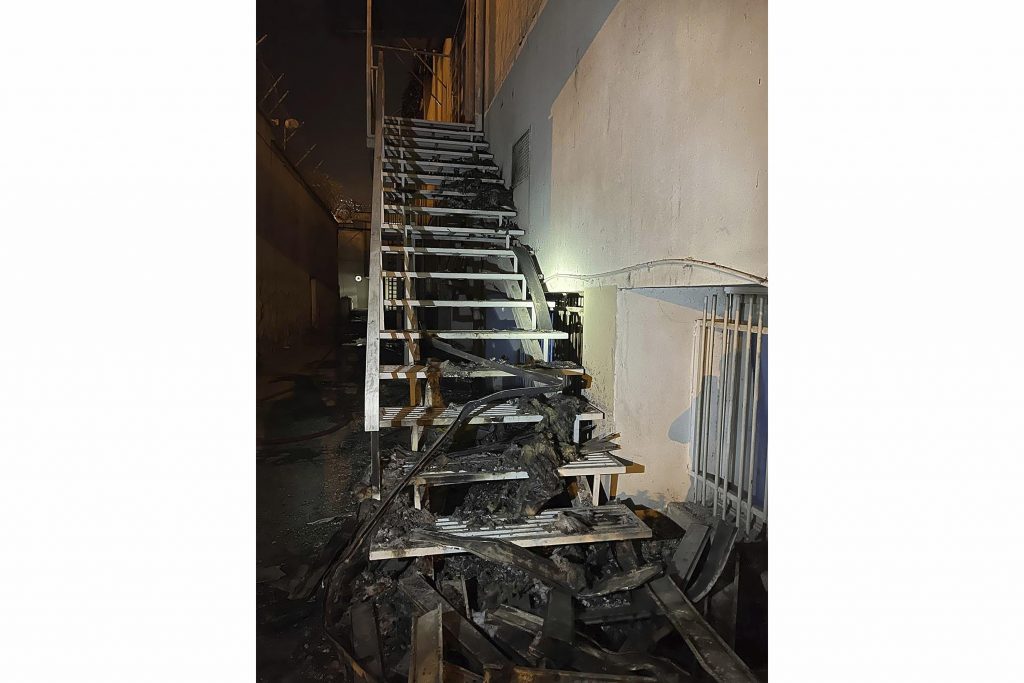 CAIRO (HPD) — A massive fire at a notorious prison in the Iranian capital holding political prisoners and anti-government activists was extinguished after several hours and no prisoners escaped, state media said Sunday. At least nine people were injured.

Flames and smoke rising from Tehran’s Evin prison were clearly visible on Saturday afternoon, as anti-government protests sparked across the country over the death of a young woman in police custody entered their fifth week. Videos on the internet showed the sound of gunshots and explosions in the prison area.

The fire started after a fight between prisoners, according to state media in an apparent attempt to distance the event from the protests. Hundreds of people are being held in Evin, where human rights groups have reported repeated abuse of prisoners.

State television broadcast images taken after the fire on Sunday showed walls and ceilings smeared black in a room described as the upper floor of a prison sewing workshop.

“This fire was caused by a fight between some prisoners in a sewing workshop,” Tehran Governor Mohsen Mansouri said. “The workshop was set up to create jobs” for prisoners, he added.

Tehran Prosecutor Ali Salehi later said that order had been restored in the prison and that the incident was not related to protests in the country over the past four weeks.

Relatives of several prisoners gathered near the prison on Sunday in the hope of hearing from their loved ones inside.

Masoumeh, 49, who gave only his first name, said his 19-year-old son had been taken to prison two weeks earlier after taking part in street protests. “I can’t trust the news about his health, I have to watch it closely,” she said.

Another man, Reza, who gave only his first name, said his brother had been in Evin since last year after being involved in a violent altercation. “He didn’t call us in the last few days and after last night’s fire, I’m here to find out what happened to him,” he said.

The US-based Center for Human Rights in Iran reported an “armed conflict” inside the prison. Shots were first heard in Module 7 of the compound, he added. It was not possible to verify that report at first.

Videos of the fire circulated on the internet. Shots and an alarm could be heard on the recordings as plumes of smoke billowed into the air. Shortly afterward, a street protest ensued, with people burning tires and many chanting “Death to the dictator!” referring to the supreme leader of Iran, Ayatollah Ali Khamenei, according to the videos.

The semi-official Fars agency, believed to be close to the Revolutionary Guards, an elite paramilitary body, said on Sunday that some prisoners who tried to escape had entered a minefield in the northern part of the prison. “The sound of explosions is said to be related to the case,” said the report, which did not offer further details. A later report from Fars indicated that the prisoners had not activated any mines.

Internet images of the fire appeared to show security forces lobbing projectiles into the area followed by the sound of explosions. It was initially unclear what kind of weapons the security forces used in the incident had used.

Witnesses said that police had blocked access roads and highways to Evin and that at least three loud explosions had been heard coming from the site. There was heavy traffic on the major highways near the prison, which is in the north of the capital, and many people honked their horns in solidarity with the protests.

Riot police were seen making their way to the compound on motorcycles, as were ambulances and fire trucks. Witnesses said the internet connection was down in the area.

The fire coincided with an increase in anti-government demonstrations on main streets and universities in several cities across the country on Saturday. Human rights observers reported hundreds of deaths, including children, after four weeks of protests.

The marches began due to public outrage over the death of 22-year-old Mahsa Amini while in police custody. The morality police had arrested her in Tehran for breaking the country’s strict dress code. The Iranian government insists that Amini was not ill-treated in police custody, but her family says her body bore bruises and other signs of beatings received after her arrest.

The Iranian parliament released a statement on Sunday saying Amini had not died from any physical blow, but had fallen and police had waited too long to seek medical attention. The chamber urged the police to apologize and give more training to their staff. He suggested that police wear cameras on their uniforms and install them in vehicles used to transport detainees.

US President Joe Biden said during a trip to Oregon that the Iranian government is “very oppressive” and that he had “enormous respect for people marching in the streets.”

Human rights groups have denounced mistreatment of prisoners at the Evin prison, where there are detainees facing security charges and prisoners with dual nationality. It has been known for years that at the center there are political prisoners and people linked to the West, who have been used by Iran as negotiating tools on the international stage.