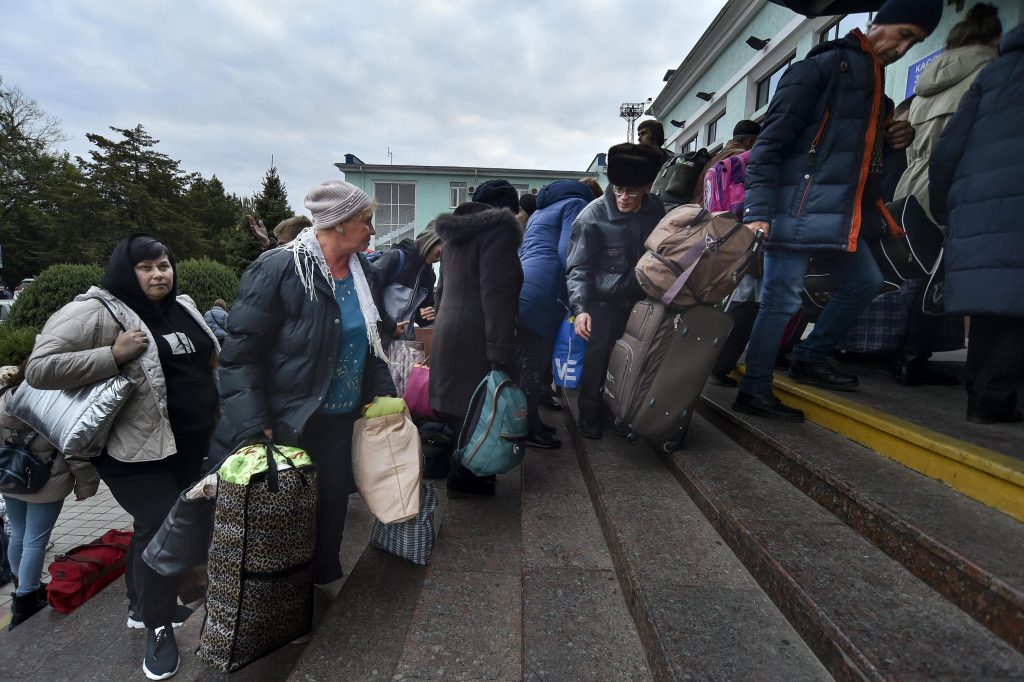 kyiv, Ukraine (HPD) — Russian-installed authorities on Saturday ordered all residents of the southern Ukrainian city of Kherson to “immediately” leave the city ahead of the expected advance of Ukrainian troops, who are waging a counteroffensive to liberate one of the first urban areas that Russia occupied after invading the country.

Via the Telegram messaging service, the Kremlin-installed regional administration called on civilians to use boats to cross a major river and into Russian-controlled territory, citing a tense situation on the front lines and the threat of suspected bombing. and “terrorist attacks” by kyiv.

Kherson has been in Russian hands since the first days of the invasion in February. The city is the capital of a region of the same name, one of four that President Vladimir Putin illegally annexed to Russia last month and then placed under Russian martial law.

On Friday, Ukrainian forces bombarded Russian positions across the province, edging ever closer to an all-out assault on their capital as they attacked pro-Kremlin forces’ resupply routes across the Dnieper River.

Russian-installed officials were reportedly desperately trying to turn the city of Kherson, a prime target for both sides due to its key industries and major river and sea port, into a fortress as they tried to relocate tens of thousands of residents.

The Kremlin sent up to 2,000 conscripts to the surrounding region to replenish its troops’ losses and strengthen units at the front, according to the Ukrainian army’s general staff.

The Dnieper River occupies a prominent place in the regional battle because it fulfills critical functions, allowing the crossing of supplies, troops and civilians, as well as drinking water for southern Ukraine and the annexed Crimean peninsula, as well as powering a hydroelectric plant. . Much of the area, including the power station and a canal that feeds water to Crimea, is under Russian control.

Kremlin-backed authorities in Kherson earlier announced plans to evacuate all Russian-appointed officials and up to 60,000 civilians across the river, in what local leader Volodymyr Saldo said would be a “gradual and organized move.”

Another Russian-installed official estimated on Saturday that around 25,000 people from across the region had crossed the Dnieper. On Telegram, Kirill Stremousov claimed that civilians were voluntarily relocating.

“People are actively moving because, today, the priority is life. We are not dragging anyone anywhere,” she assured, in an apparent response to allegations made by Ukraine and the West about possible forced relocations by Moscow.

Ukrainian authorities have urged local residents to resist attempts to relocate them, with a local official alleging that Moscow wanted to take the civilians hostage and use them as human shields.

Elsewhere, hundreds of thousands of people in central and western Ukraine woke up Saturday to power outages and periodic volleys of gunfire as Ukrainian anti-aircraft defenses tried to shoot down approaching drones and missiles.

Russia has stepped up its attacks on power plants, water supply systems and other key infrastructure across the country in the latest phase of a war that has lasted nearly eight months.

In a statement, Ukraine’s air force accused Moscow of launching “a massive missile attack” on “critical infrastructure” on Saturday, hours after air-raid sirens sounded across the country. Ukrainian troops shot down 18 of 33 air- and sea-launched cruise missiles, the note added.

kyiv Mayor Vitali Klitschko said on the Telegram messaging app that “several shells” aimed at the capital were also shot down on Saturday morning. The governors of six provinces in the west and center of the capital, as well as that of Odessa, on the Black Sea coast in the south, made similar statements.

In its morning report, the Ukrainian presidential office said in the central Cherkassy region, southeast of kyiv, five explosive-laden drones were shot down.

The western city of Khmelnytskyi, located on the banks of the Bug River and with a pre-war population of about 275,000, lost power shortly after local media reported several powerful explosions. Local authorities asked residents on social networks to store water, “in case it is also cut off in an hour.”

The mayor of Lutsk, a city with 215,000 residents in the far west of the country, made a similar call on Telegram on Saturday.

Earlier in the week, President Volodymyr Zelenskyy called on the population to limit their energy consumption between 07:00 and 11:00 in the morning and avoid using high-drain appliances such as electric heaters.

In the past two weeks, Russia has intensified its attacks on key civilian infrastructure across Ukraine. About 40% of Ukraine’s power system is severely damaged, according to authorities. Zelenskyy claimed earlier in the week that 30% of power stations had been destroyed since October 10.