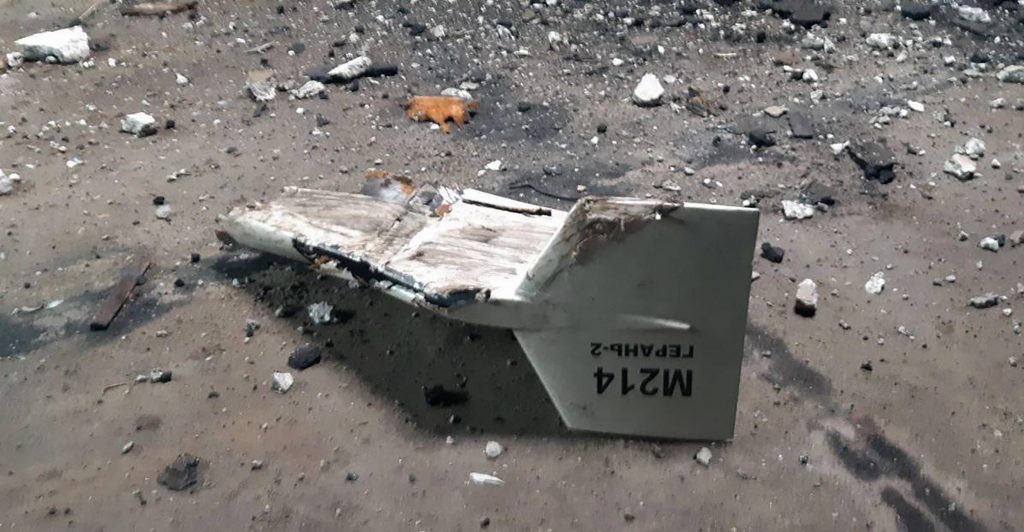 They are accurate, small, capable of penetrating anti-aircraft defenses when launched in a group, and most importantly, they are cheap.

In the Russian invasion of Ukraine, explosive drones have cemented their reputation as a powerful and inexpensive weapon that can locate and destroy targets while instilling the kind of terror that can break the will of soldiers and civilians alike.

They are also rapidly overtaking missiles as the long-range weapon of choice. Known as “the poor man’s cruise missiles,” these flying killing machines can flood any battlefield at much lower cost.

HOW DO WAR DRONES WORK?

The Shahed drones that Russia has renamed the Geran-2 are what are known as loitering munitions, which are also part of the Ukrainian arsenal.

Equipped with an explosive charge, they are pre-programmed with GPS coordinates of the target. They can loiter in the air and swoop toward targets, similar to the way Japan’s kamikaze pilots did in World War II, who flew explosive-packed aircraft directly at American ships and aircraft carriers during their battles in the Pacific.

According to the Ukrainian online publication Defense Express, which cites Iranian data, the Shahed hang-gliding drones are 3.5 meters (11.5 feet) long, 2.5 meters (8 feet, 3 inches) wide and weigh about 200 kilograms (440 pounds). They are powered by a 50 horsepower engine with a top speed of 185 km/h (114 mph).

Such drones had already been used in Yemen and in an attack on an oil tanker last year, said Behnam Ben Talebu, a senior fellow at the Foundation for Defense of Democracies, a Washington-based think tank.

And although it has a range of about 1,000 kilometers (621 miles), Samuel Bendett, a drone expert at the CNA research center, says Shahed drones are being used in Ukraine over much shorter distances. That’s because its GPS guidance system isn’t very robust and can be blocked.

The Iranians are known to have controlled Shahed drones by radio. Whether Russia is capable of doing the same in Ukraine is unknown.

Because they are cheap and plentiful, Russia is able to flood Ukraine with Shahed without risking the lives of its pilots or putting any sophisticated aircraft at risk.

In Monday’s offensive over the Ukrainian capital, kyiv Mayor Vitali Klitschko said groups of 28 drones made successive raids. Fired in rapid succession from a launcher located on a truck, the drones can fly at low altitudes and speeds, allowing them to evade radar.

Technically, they don’t swarm, Bendett pointed out. That kind of sophisticated drone technology does exist, where multiple unmanned aerial vehicles communicate with each other. Instead, the Shahed is launched in large numbers to break through defenses, especially in civilian areas. “They know that most will not pass,” he said.

However, its ability to cause fear outweighs its explosive ability.

According to Mykola Bielieskov, a researcher at Ukraine’s National Institute for Strategic Studies, the Shahed only carry an explosive payload of 40 kilograms (88 pounds), which isn’t much compared to the warhead’s explosive force of 480 kilograms (1,050 pounds). ) of a conventional missile.

“It is difficult to hit important targets with this type of drone,” Bielieskov said.

A WEAK BLOW BUT AT A LOW COST

Priced at just $20,000 each, the Shahed costs just a fraction of a missile. For example, Russia’s Kalibur cruise missiles, which have been used on a large scale during the eight-month conflict, cost the Russian military around $1 million each.

At such a low price, Shaheds have been successfully used to saturate targets, whether it be a fuel depot or power or water infrastructure. Russia has used them precisely in combination with intelligence drones to target Ukrainian artillery, Bendett said.

Despite its small size, the Shahed’s explosive charge appears to be powerful enough to cause damage. In Monday’s offensive, one drone hit an operations center while another crashed into a five-story residential building, opening a huge hole in it and causing at least three apartments to collapse, killing four. people.

Bieleskov said Russia is now launching its Shahed against civilian rather than military targets because Ukrainian forces “have learned to fight them effectively,” intercepting just over half of them.

With no immediate end in sight, the financial burden of the conflict will be heavier on Moscow, which, unlike Ukraine, is not receiving billions in weapons from Western nations. As the conflict turns into a war of attrition — in which whoever can bear the human, material and financial burden longest will have the upper hand, finding cheap and powerful weapons will be of paramount importance.

“The Shahed-136 is a cheap version of a cruise missile, which Russia cannot produce quickly,” Bielieskov said.

Taleblu noted that Russia may continue to bolster its long-range attack capabilities with Iranian drones.

“This should set off alarm bells for Europe and for the world,” he stressed.

Russian authorities have not released any data on the number of missiles they have fired during the conflict, but Ukraine’s Defense Ministry recently said Moscow has used most of its 1,844 high-precision missile arsenal. it had before the invasion 609 in mid-October.

A WAR OF NERVES

The whir of the propellers of the Shahed drones, dubbed “clippers” by fighters, can strike fear into anyone in its path because no one on the ground knows exactly when or where it will land.

Ukrainian President Volodymyr Zelenskyy spoke about the fear factor caused by drones, posting on social media that “all night, and all morning, the enemy terrorizes the civilian population.”

Bielieskov admitted that the Shahed drone strikes cast doubt on the effectiveness of Ukraine’s anti-aircraft defenses. But he assured that its use, even on a large scale, cannot reverse the Ukrainian advances on the battlefield.