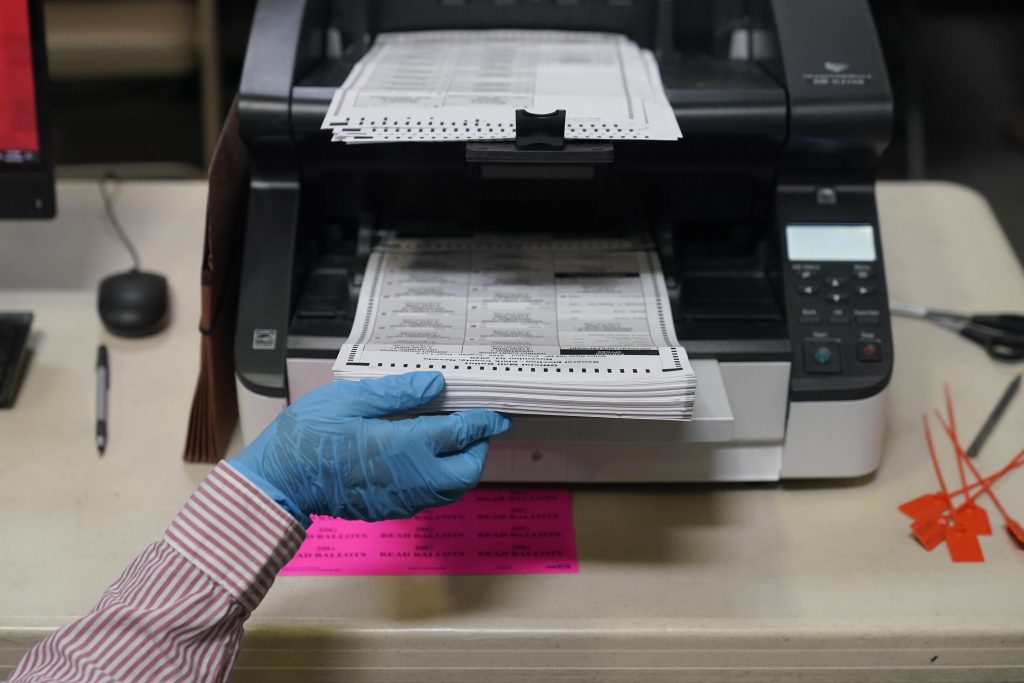 ATLANTA (HPD) — Former President Donald Trump and his allies have launched a relentless campaign of attacks against voting machines since his defeat in the 2020 election. After nearly two years, no evidence has emerged that the voting machines were tampered with. to steal the election or that there was widespread fraud.

However, conspiracy theories spread online and in forums across the country have undermined public confidence in voting machines and election results while prompting some counties to consider ditching the equipment in favor of ballots. marked and counted by hand.

Elections have been held across the country this year during a very busy primary season. Although bugs sometimes occur and equipment can crash, no major problems have been reported. Voting equipment is tested before and after to identify any problems, while post-election audits confirm that it worked properly.

The Associated Press explains how we got to this point, efforts to increase voting security, and the fallout from false claims surrounding the 2020 presidential election.

VOTING TECHNOLOGY IN USE IN THE UNITED STATES

The types of voting equipment used throughout the United States vary by location. For voting in person, most people fill out ballots by hand and those ballots are inserted into an electronic tabulator. In many cases this happens at the polling place. Elsewhere, ballots are collected from a secure voting drop box, with rules governing chain of custody, and taken to an electoral office for electronic tabulation.

In some places, voters use a specialized computer to mark their ballots electronically. Those ballots are printed, reviewed by the voter to ensure accuracy, and then inserted into a tabulator at their polling place. A lawsuit in Georgia is challenging the use of these “ballot marking” machines because they use barcodes to record votes.

Tabulators also count ballots mailed in at a local election office. A small number of jurisdictions, mostly small New England towns, do not use tabulators and count their ballots by hand.

HOW HAS THIS CHANGED OVER THE YEARS?

After the chaos of mis-punched ballots in the 2000 election (so-called “hanging chads”), Congress provided money to improve the voting system. Many jurisdictions have turned to electronic voting machines to replace their punched ballot systems. But those machines did not produce a paper record: instead, all votes were cast and recorded electronically.

For years, election security experts have expressed concern about these “direct registration” machines and the possibility of someone tampering with them. A more secure method, they say, is a system that uses paper ballots and electronic tabulation with post-election review and testing to ensure that the machines accurately recorded voters’ choices.

Over the past decade, state and local governments have begun replacing their paperless machines, a process that accelerated after the 2016 election and revelations that Russia had scanned US voting systems for vulnerabilities. Currently, paperless machines are used only in Louisiana and a handful of jurisdictions in Indiana, Mississippi, New Jersey, Tennessee and Texas, according to Vote Verified, a group that tracks voting technology in the United States.

In the weeks after the 2020 election, Trump and his allies made numerous unsubstantiated claims about the voting machines, including that their computer program was created in foreign countries and designed to swap votes for desired candidates: “By spinning a remote or change a chip, you can press a button for Trump and it goes to Biden,” Trump said in a December 2 speech.

These claims have largely focused on Dominion Voting Systems, one of the few companies that dominate the US voting technology market. In response, Dominion has filed defamation lawsuits against conservative media outlets and Trump attorneys Sidney Powell and Rudy Giuliani, saying “lies and misinformation have seriously damaged our business and diminished credibility in the media.” American elections.”

But instead of dissipating, the conspiracies around the voting machines have only grown. Trump allies have traveled the country speaking at conferences and with community groups armed with algorithms and graphs purporting to show that the machines have been tampered with in some way.

Kevin Skoglund, an election technology expert, said part of the challenge is that voting systems are complex. Understandably, some people have been persuaded that something nefarious happened when it didn’t.

“If you’re a non-technical person, if someone tells you that the machines are playing tricks on you, you might believe it because you don’t understand how the systems work,” Skoglund said.

Any device that runs software – a cell phone, a laptop or a voting system – is vulnerable to hacking. That’s why election experts have pushed for paperless voting machines to be replaced.

Experts say the United States has taken steps to improve election security in recent years. That includes designating America’s voting systems as “critical infrastructure” in 2017 — on a par with the nation’s banks, dams and nuclear power plants.

“There is no such thing as an invulnerable system,” said Larry Norden, an election security expert at the Brennan Center for Justice. “That doesn’t mean we can’t do better. We always have to look at how we can do better, but you can’t eliminate risk.”

False claims have not only undermined public confidence in elections. They have also caused security breaches at some local election offices in Colorado, Georgia and Michigan.

Shortly after the 2020 election, Trump allies took advantage of a bug in a Michigan county and gained legal access to its voting system through the courts. But a copy of the county’s election management system was made available at an August 2021 event hosted by a Trump ally, MyPillow CEO Mike Lindell, according to attendees.

A copy of the system used in Mesa County, Colorado was also presented at that event. Details of another alleged violation recently emerged: in Coffee County, Georgia, as Trump allies were seeking ways to overturn the result of the January 2021 presidential election. Michigan authorities are investigating after voting teams in a handful of counties were made available to unauthorized persons.

Those developments have raised concerns that rogue poll workers sympathetic to the conspiracies could use their access to voting equipment and knowledge to launch an insider attack. A poll worker in Michigan was recently accused of inserting a personal USB stick into an electronic voter registry during the state’s primary election, as authorities in Colorado investigate a case in which a voter is suspected of tampering with a voting machine early in the election. of this year.

Following the 2020 presidential election, a coalition of federal election and cybersecurity officials, along with state election officials and representatives from voting machine companies, issued a statement calling it “the most secure in the history of USA”.

The group said there was “no evidence that any voting system removed or lost votes, shifted votes, or was compromised in any way.”

This was largely due to available paper records of approximately 93% of all votes cast and a system of post-election checks to test the accuracy of electronic tabulators. In Georgia, the presidential vote was counted three times — once entirely by hand — with each count confirming President Biden’s victory in the state.

“It doesn’t matter what happens in the machine,” said Norden of the Brennan Center. “We have a piece of paper that tells us if the votes were recorded accurately.”