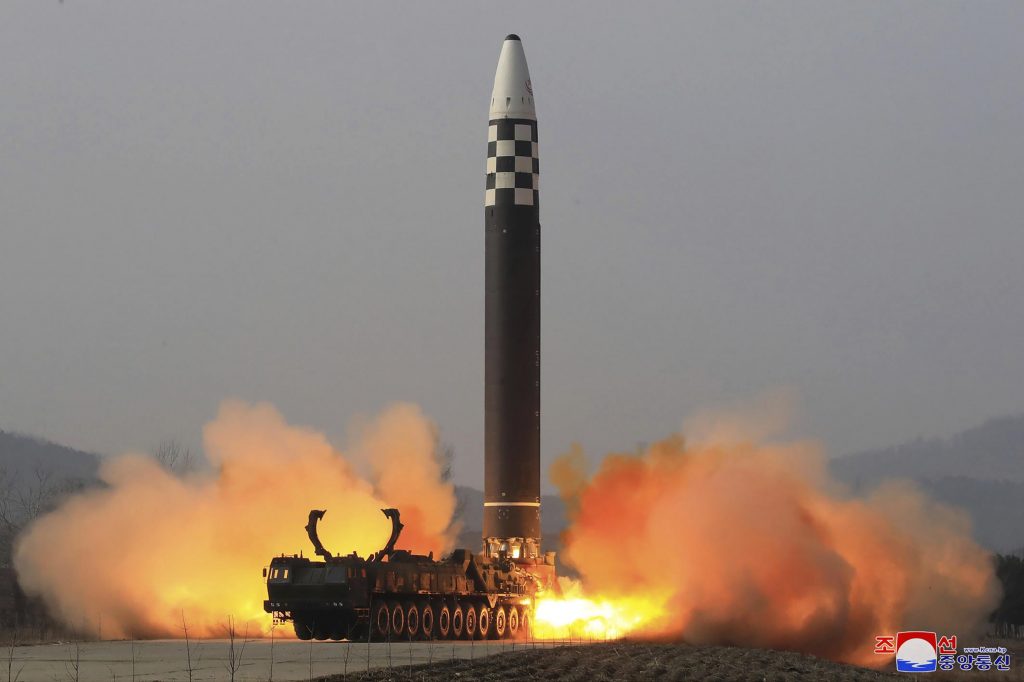 SEOUL (HPD) — North Korea’s string of missile launch tests, including Wednesday’s record of at least 23, raises an important question about its weapons program: How does the impoverished country pay for the seemingly endless tests?

While some experts estimate that each launch could cost between $2 million and $10 million, others say there is no way to accurately estimate given Pyongyang’s tight-lipped approach. They believe that North Korea probably manufactures weapons at a much cheaper cost than other countries due to free labor and possible clandestine support from China and Russia.

Whatever the answer, there is no sign that the country’s economic difficulties are holding up its weapons tests. Instead, the barrage of evidence indicates that leader Kim Jong Un is determined to prove that he has the capability to launch nuclear strikes against South Korea and the United States to win future concessions.

Here’s a look at the financial dimensions of North Korea’s missile tests.

HOW MUCH DOES EACH TEST COST?

North Korea launched at least 23 missiles on Wednesday and six more on Thursday, adding to its record pace of weapons tests this year. Many were nuclear-capable ballistic missiles designed to destroy South Korean and US targets.

The tests are likely to include a Hwasong-17 intercontinental ballistic missile under development, surface-to-air missiles and a variety of short-range ballistic missiles. North Korea has a reputation for frequent missile tests, but it has never launched so many in a single day.

Soo Kim, a security analyst at the California-based RAND Corporation, puts the cost of a North Korean missile test at about $10 million, which would be lower than similar tests in other countries, in part because the hand of North Korean labor is cheap.

Bruce Bennet, another RAND Corporation expert, told Radio Free Asia that Wednesday’s short-range missiles cost between $2 million and $3 million each and the total cost for the day was between $50 million and $75 million. RFA said the maximum estimate is for the amount of money Pyongyang earmarked to import rice from China in 2019 to cover the grain shortage that year.

Lee Illwoo, an expert at the Korea Defense Network in South Korea, said it is impossible for outsiders to accurately estimate the production costs of North Korean weapons. “There is no way we can find out at what cost North Korea produces certain weapons parts. They could have made them themselves, or China could have given them to them for free or at an extremely low price,” he said.

According to the Korea Defense Analysis Institute, a Seoul government body, North Korea is estimated to have spent up to $1.6 billion on its nuclear program since the 1970s. The report used analyzes of nuclear development programs in other countries. Some observers advise against using foreign data because Pyongyang does not have to pay for labor or land.

HOW ARE RELEASES FUNDED?

North Korea’s economic difficulties have worsened due to COVID-19, but there have been no reports of substantial social unrest or food shortages.

In addition to the record number of missile tests this year, there are also signs that North Korea is expanding its munitions facilities, possibly with the idea of ​​mass-producing newly developed weapons, Hong said.

“This is where sanctions-violating activities come into play, including (North Korea’s) recent foray into cybercrime and cryptocurrency hacking,” he said. “And, of course, having willing partners in Beijing and Moscow who help breach sanctions also helps the regime’s weapons development thrive.”

Hong said Russia’s war in Ukraine appears to have opened up a new opportunity for North Korea amid accusations from Washington that the North is covertly sending a “significant” amount of artillery shells to Russia. Hong said that in return, North Korea can seek transfers of Russian technology and supplies needed to expand its military capabilities.

WHAT DOES NORTH KOREA GAIN?

Each of North Korea’s nuclear and missile tests provides its scientists with “valuable data” on weapons development and also helps solidify Kim Jong Un’s leadership as it shakes up the South Korea-U.S. alliance. according to Kim Taewoo, former head of the Seoul-based Korean Institute for National Unification.

“Some people say that we should let North Korea keep firing missiles into the sea so that they use up their resources. But I would say that is an extremely naive opinion,” she noted.

South Korean media reported that the launch of the Hwasong-17 on Thursday failed because it did not follow a normal flight and fell into the ocean after a staged separation. In the previous test, in March, the Hwasong-17 exploded shortly after takeoff.

“The missile is under development. Therefore, this is not the time to say that its launch was a failure and laugh at it,” explained Lee of the Korea Defense Network. “This time the missile had a staged separation and I think they have made a lot of technological progress.”

North Korea has argued that its missile tests are a warning against a series of joint US-South Korean military exercises it views as an invasion drill. Considering that, the North Korean tests are likely to continue as Washington and Seoul hold drills regularly.

North Korea is estimated to have some 1,000 ballistic missiles, more than enough to continue its pressure campaign until the 2024 US presidential election to try to win sanctions relief and other concessions, said Go Myong-hyun, an analyst. from the Asan Institute for Policy Studies in Seoul.

“What North Korea wants to show before 2024 is that its nuclear weapons arsenal is well advanced, that it is complete, and that it poses a much greater threat than before,” Go said. “It is crucial for them to maintain that threat perception with the United States and they are not going to calm down suddenly.”