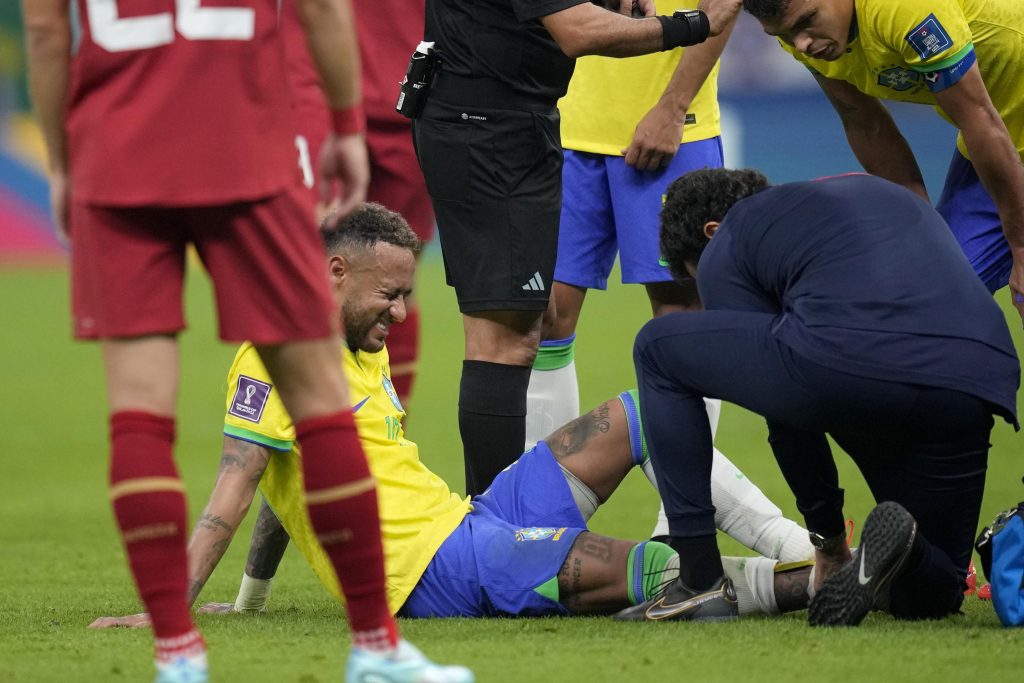 LUSAIL, Qatar (HPD) — Neymar ended up crying on the bench and left the stadium limping with a badly swollen right ankle after Brazil’s 2-0 win over Serbia at the World Cup in Qatar on Thursday.

Rodrigo Lasmar, the doctor for the Brazilian team, confirmed that the star suffered a sprained ankle.

“We started ice treatment on the bench and then he had physical therapy,” Lasmar said. “At the moment an imaging test has not been planned, but we will do it if there is a need. He will be under observation. We will know more tomorrow.”

“Everything that talks about evolution, sequelae, is premature,” he added. “We have to wait”.

Meanwhile, coach Tite was optimistic about the condition of the 30-year-old striker.

“I am sure that Neymar will play in the World Cup, I am absolutely sure of that. He is going to play in the Cup, ”said the Brazilian coach.

He was also injured in the 2014 edition.

At home for the first World Cup of his career, Neymar suffered a fractured vertebra and was ruled out of the tournament. The injury was caused by a knee inflicted by the Colombian Camilo Zúñiga in the quarterfinals, and he had to go on a stretcher to the hospital. Brazil ended up losing 7-1 to Germany in the semifinals.

Against Serbia on Thursday, Neymar was the victim of nine fouls. He gave the impression that he suffered the injury after a hard challenge from Nikola Milenkovic during a counterattack in the second half. He was limping for a while, but kept playing until his replacement was ordered in the 79th minute.

“He kept playing through the injury because the team needed him,” Tite said. “I didn’t even pay attention to the moment of the injury. He did not stop playing ”.

He was seen crying and covering his head with his shirt on the bench as Brazil’s medics treated him during the final minutes of the game at the Lusail Stadium. He limped off to the dressing room without commenting to the press.

“The most important thing for us is to have him at one hundred percent in the next game”; said striker Richarlison, scorer of both goals on Thursday, including one started by Neymar. “When I get to the hotel I’ll find out how he is.”

Neymar has suffered a string of injuries since the 2018 World Cup, but arrived in Qatar at a splendid time with his club Paris Saint-Germain.

He has not won a big title with the senior team. He won the 2013 Confederations Cup and won the Olympic gold medal at the 2016 Rio de Janeiro Games.

With 75 goals for the national team, he is two goals away from the record held by Pelé.