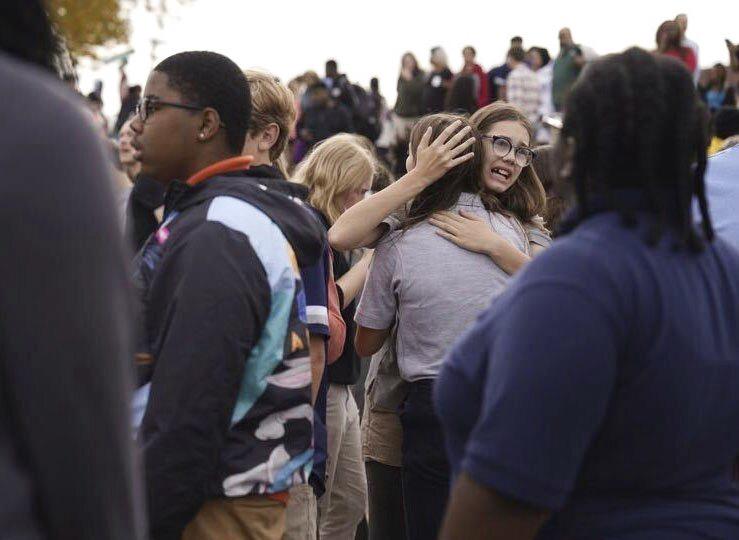 ST. LOUIS (HPD) — A gunman stormed a St. Louis high school Monday morning, killing a woman and a teenage girl and injuring six others, and later died after being shot dead by police in a gunfight.

The shooting after 9 a.m. at the Visual and Performing Arts High School forced students to barricade doors and crowd into corners of classrooms, jump out of windows and run out of the building in search of of security. One terrified girl said she came face-to-face with the shooter before her gun jammed and she was able to run.

At a news conference, Police Commissioner Michael Sack said the shooter was in his 20s, but did not release his name or the names of the victims. He declined to say whether the woman who had died was a teacher.

St. Louis Schools Superintendent Kelvin Adams said seven security guards were at the school at the time of the shooting, each at an entrance to the locked building. One of the guards noticed that the young man was trying to open a locked door, but he couldn’t. The guard notified school authorities and made sure police were contacted, Sack said.

“It was that timely response from the security officer, the fact that the door caused the suspect to pause, that bought us some time,” Sack said.

Sack would not say how the man finally got in, armed with what he described as a long gun.

Cops worked to get the students out of the three-story brick building, and then “ran to where the gunshots were being heard, located the shooter and engaged him in an exchange of gunfire,” killing him, Sack said.

Some of the six people hospitalized suffered gunshot wounds, while others were hit by shrapnel, Sack said. He did not provide any information about his condition.

One student, 16-year-old Taniya Gholston, told the St. Louis Post-Dispatch that she was in a classroom when the assailant entered.

“All I heard was two shots and he came in with a gun,” Gholston said. “I was trying to run but I couldn’t. We made eye contact but I managed to get out because his gun jammed. But we saw blood on the floor,” he added.

Another student, Nylah Jones, a ninth grader, told the Post-Dispatch that she was in math class when the assailant fired into the classroom from the hallway. The shooter was unable to get into the classroom and banged on the door as students crowded into a corner, she said.

Janay Douglas’s 15-year-old daughter was trapped in a hallway when the school was locked down. Douglas said she received a call from her daughter, letting her know that she had heard gunshots.

“One of her friends came out of a door, was shot in the hand, and then she and her friends ran. The phone was disconnected,” Douglas said. “It was already on its way.”

“Our kids shouldn’t be living through this,” Jones said at a news conference. “They shouldn’t have to do active shooter drills in case something happens. And unfortunately that has happened today, ”he added.