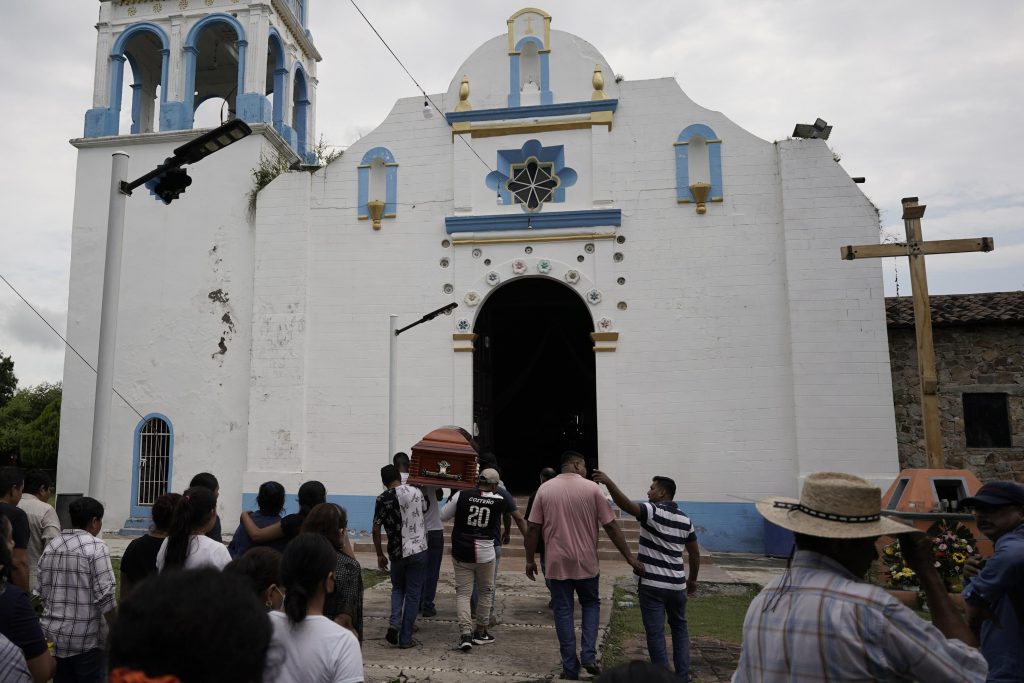 Only the members of the funeral processions walked through its streets under the watchful eye of dozens of soldiers who shielded the place after the massacre the day before.

Meanwhile, many fearful neighbors watched through their windows at a new exercise of power by organized crime in that area of ​​drug production and transit, one of the most violent in Mexico.

The Security Council of the state of Guerrero, where Totolapan is located, indicated in a statement that armed civilians fired bullets at the town hall where the mayor, Conrado Mendoza, “was holding a meeting with his work team.” Authorities confirmed that Mendoza and his father, former mayor Juan Mendoza Acosta, were among the victims.

The walls of the building, which at that time was surrounded by a children’s amusement park, were completely riddled. However, neighbors and emergency personnel who treated the victims indicated that the place where the mayor and his team were murdered was a building several blocks from the town hall, where said personalities had been summoned for a meeting.

This place, visited by The Associated Press, was the one that appeared with corpses in the videos that were published on social networks and triggered the alarms. Hundreds of shell casings were scattered through various streets surrounding the town hall.

The affected families began the burials of their loved ones on Thursday morning, while a video circulated on social networks in which the murderers, who identified themselves as the Los Tequileros gang, declared themselves responsible for the massacre. Other recordings showed how the attackers had blocked access to the town to delay the arrival of the security forces.

The Undersecretary of Public Security of Mexico, Ricardo Mejía, indicated that Los Tequileros are fighting the Familia Michoacana cartel and that the authenticity of the video is being verified.

“The event takes place in the context of the criminal dispute between criminal groups,” said Mejía. “In that region, a group known as Los Tequileros prevailed for a time, which was a group dedicated fundamentally to the transfer and commercialization of poppy, but also dedicated to kidnapping, extortion and perpetrated various homicides and disappearances in the region.”

Totolapan, a large municipality with just over 50,000 inhabitants in a region known as “Tierra Caliente” —which extends between the states of Guerrero, Michoacán and the State of Mexico—, was controlled for years by drug trafficker Raybel Jacobo de Almonte, aka “The Tequila”.

In his only known public appearance, Almonte appears in a video in 2015 drinking with Mendoza Sr., then the mayor-elect. It was not clear if Mendoza was there of his own free will or by force. In that video, Almonte appeared to be so drunk that his babbling was unintelligible and one of his henchmen was holding him up so he wouldn’t fall off his chair.

In 2016, the inhabitants of Totolapan, fed up with the kidnappings of Los Tequileros, held the mother of the head of that criminal group to force the release of the hostages.

For a long time, Los Tequileros dedicated themselves to trafficking in opium gum, which is extracted from poppy crops in the area, one of the sources of employment for many very poor communities in these mountains that are difficult to access, where gold mining operations proliferate. among other metals. Now the growing consumption of fentanyl, a synthetic opioid, has made poppy a much less profitable business. Violence in Guerrero has decreased.

Separately, in an incident Wednesday in a region close to but unconnected to the Totolapan attack, a Morelos state legislator was shot dead in the city of Cuernavaca, south of Mexico City.

Two men on a motorcycle killed deputy Gabriela Marín when she was getting out of a vehicle in front of a pharmacy.

“A motive related to revenge or a political matter cannot be ruled out,” Mejía said about the attack in which, according to the local press, there was also one wounded. Sánchez had assumed his seat in July after the death of another legislator “and there were different litigations according to this fact of assuming the deputation,” the official explained.

These two crimes raised the number of mayors assassinated during the presidency of Andrés Manuel López Obrador to 18 and the number of state deputies to eight, according to data from Etellekt Consultores.

The events took place just when Congress is debating the president’s project to extend the security tasks of the armed forces until 2028 and criticism of the executive branch has multiplied for the growing militarization of the country.

They also happen at a time when López Obrador’s security strategy is the subject of intense debate due to the lack of results. The president has entrusted the military with all the responsibility for curbing the violence, instead of betting on reinforcing the civilian police, and has attributed the persistent insecurity to the failures of previous governments.

“They are (criminal) organizations that come from long ago, they did not emerge in this government,” said López Obrador. “There are still populations (in Tierra Caliente) that protect these groups, even voting for them to act as authorities.”