Skip to content
Home » 100 years after the March on Rome, the fascist ghost returns 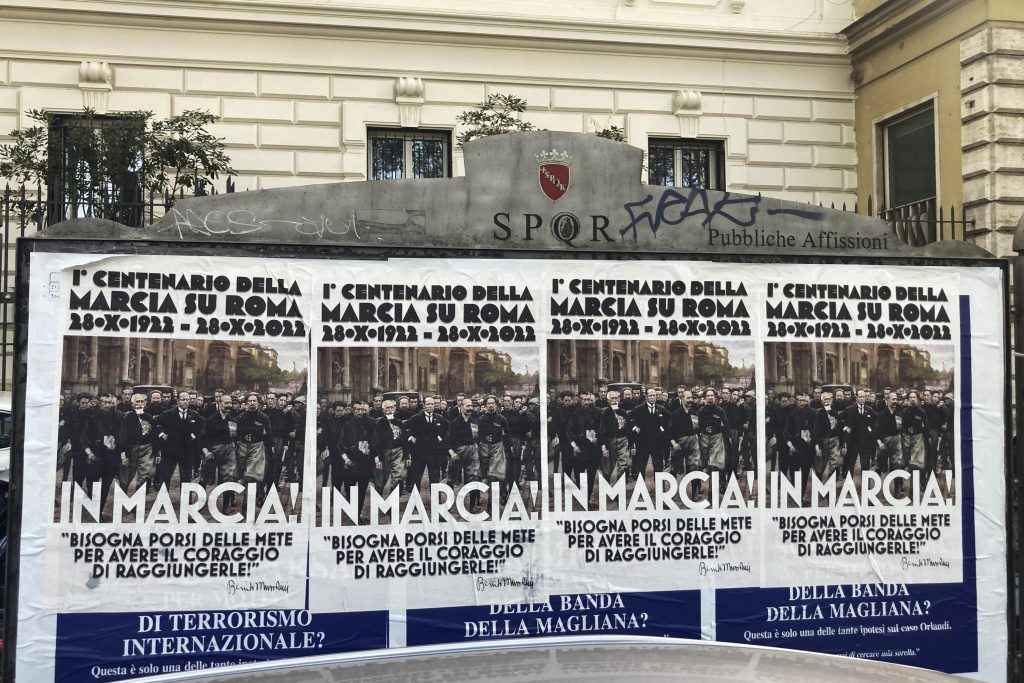 MILAN (HPD) — Italy has never finished burying its fascist past, and that is obvious as it prepares to commemorate Friday the 100th anniversary of the March on Rome that brought dictator Benito Mussolini to power, coinciding with the inauguration of the first post-war government headed by a party with neo-fascist roots.

The symbolism is problematic: new Prime Minister Giorgia Meloni’s far-right Brothers of Italy party retains the flame emblem used by fascists; one of the founders of that group, Ignazio La Russa, whose middle name is Benito and whose office is full of fascist memorabilia, was elected president of the Senate.

Meloni tried to dilute the neo-fascist roots of Brothers of Italy and this week said in Parliament: “I never sympathized with or was close to anti-democratic regimes, including fascism. I always considered the racial laws of 1938 the worst moment in the history of Italy, a shame that will mark our people forever. He was alluding to laws adopted under Mussolini that persecuted the Jewish community.

It remains to be seen if the moderate tone recently assumed by the prime minister is maintained and, in any case, how those nostalgic for fascism, who represent 4% of her party, respond.

The National Association of Italian Partisans (ANPI), which keeps the memory of resistance alive during the war, says the far right feels emboldened in regions ruled by Brothers of Italy.

ANPI president Gianfranco Pagliarulo said a region’s governor had withdrawn funds for the maintenance of street plaques bearing the names and dates of Jewish holocaust victims in front of their homes.

He added that his organization is being harassed more than ever.

“It’s something very alarming,” Pagliarulo said. “It is evident that the victory of the nationalist right will generate a resurgence of provocative neo-fascist attitudes. We are not worried because we are going to fight them with political weapons and, if necessary, with legal weapons.”

The ANPI plans to hold a demonstration in Predappio, where Mussolini is buried, on Friday to commemorate the liberation of that northern Italian city on October 28, 1944. The partisans who liberated the city chose that date to overshadow the memory of the March on Rome, which was a bloodless coup resulting from the arrival of thousands of fascist demonstrators in Rome with the tacit approval of the King of Italy.

It prevents those nostalgic for fascism from commemorating that day the March on Rome. That commemoration is scheduled for Sunday, the last day of Mussolini’s historic “black shirt” march, which is one of three celebrations held by neo-fascists in Predappio every year.

They also commemorate the birth of Mussolini, on July 29, 1883, in a house not far from the cemetery with its crypt, and on April 28, 1944, the day he died at the hands of partisans in Milan.

“The March on Rome represents the myth of the birth of fascism in Italy. For us it is a negative myth, which marks the origin of a disaster that led Italy to several wars, the most catastrophic of which was World War II,” Pagliarulo said. “We have to combat the positive myth related to the March on Rome and remember that date as the beginning of the darkest period in modern Italian history.”

Francesco Minutillo, a 42-year-old lawyer from a small town near Predappio, has for years attended the three annual commemorations of fascism in front of Mussolini’s tomb. He says these are times when they pray and he predicts a strong turnout this year.

“It is not to commemorate the March on Rome. It is to remember Benito Mussolini, who is buried here,” said Minutillo.

Former councilor of the Brothers of Italy of Forli, Minutillo left the party in 2020, when Meloni moderated his positions a bit. He says that he and others like him hope that a new movement will emerge.

“At the moment there is no alternative to the right of the Brothers of Italy. Our community must wait for a truly transparent political party, with our values ​​and our social structure”, he expressed.

Asked if he longed for Mussolini or for fascism, he said: “I can’t answer that question under the current laws.” The defense of fascism is a crime in Italy.

Italy never finished condemning fascism, as Germany did Nazism, and the Italian Social Movement, a neo-fascist party, was part of the first post-war government in 1946. The fascist legacy lives on and is manifested in buildings from that era all over the country, from schools in small towns to the stately train station in Milan and the Court building and the EUR district in Rome.

There are people who continue to believe that two decades of fascism promoted progress in Italy. And from time to time you see a painting of Mussolini in a bar, especially in northern Italy. Although such demonstrations are considered a crime, they are rarely punished.

“Historians teach us that fascism ended in 45, which is true. But not the fascists,” said another historian, Francesco Filippi, author of a book on misperceptions about fascism. “Millions of people who participated in that regime and continued to be part of the political life of Italy, and even parties that directly referred to fascism, continue to participate in the political life of the country.”

Filippi believes that Meloni has attracted moderate right-wing sectors, who expect him to form a “normal, anti-fascist and democratic values” conservative government.